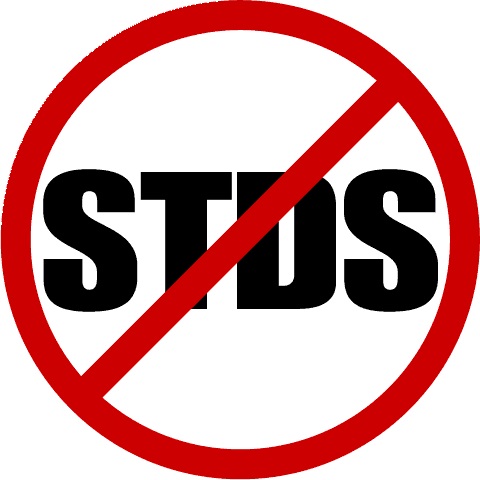 Choose your own risk...

At a Party... You are at a party at a friend's house. You meet a very attractive guy who is a friend of a friend. You and he talk all night and into the morning. You have a lot in common. He looks very attractive and fit. He says that he's only had a few girlfriends. He says he's careful. He asks about your sexual health history, and you tell him. Neither of you have been tested for anything, but you're thinking you're fine because you've not had any symptoms of anything. And you've never been with anyone you haven't known. He seems shy and not like the type who would get around. You think, one time won't hurt. It might be harder to have The Talk about STDs and sexual health, and it might be awkward asking for an actual test before moving forward. Other people seem to be sexually active and seem all right. What do you do?

At a Bar... You're at a bar in Aggieville relaxing with your friends. You're watching the sports action on the television screen. You're not really looking to connect with someone. But there's this girl who seems to keep looking over at your table. She's not checking out your friends. She's actually checking you out. She looks really attractive—tan and athletic. You get your friends to head over, and you all shoot the breeze. She gives you her number and makes it very clear that she'd like to get to know you better. You hang out with her a couple times at the dorms. You go to a couple home games together. You want to move it to the next level. You invite her over to your place, and you think it's time to make a move. You don't want to over-think this, and you don't want to offend her by asking if she has an STD or even if she's ever been tested. What do you do?

At the Church... You're at church, and your parents' friends have college-age children. You have known each other growing up in the same home town. You have a crush on --. You reconnect at the library and think that this may be the start of an important and long-term relationship. You hang out several times a week to study. You find yourselves making out at your place one night and really want to go farther. You want to make this a more committed relationship, and while you are generally conservative, you think that it makes sense to move the relationship forward. You connect so well, and the text messages are so meaningful and profound. You figure --- is safe because you've never heard of any prior relationships. What do you do?

Hooking up... You're out to score tonight. You've been in the mood to meet someone. You don't have time to really spend having a conversation or pretending to be interested. The mood is right, and if anyone else agrees, you want to set up a "booty call," no strings attached. You plan on using condoms, and you have some on hand. You know that there are STD risks that are not protected even if you use condoms perfectly, but you think those are manageable risks. You're more concerned about not getting into any relationship and having a sex partner have any expectations. You plan on being fully direct and open about just wanting the sex, and you think whoever you hook up with can handle it. When you're ready for a more serious relationship, you'll deal with those challenges then. Right now, it's about the adventure.

What do you do?

Versions of the above scenarios play out a variety of ways in real life. All four scenarios involve assumptions and incomplete information in relation to sexual health.

College students are in a high risk category for acquiring sexually transmitted diseases (STDs), and the rates for STD infections have been rising. An estimated 20 – 25% (one-in-five or one-in-four) college students has or has had an STD. [In the US, over 65 million people (or about one-in-four Americans) are living with an incurable STD; with high turnovers in intimate relationships, it may be that STDs are the only "forever kind of thing."] Two-thirds of all individuals with STDs are under 25 years old. The most common types of STDs on campuses are Chlamydia, genital warts (HPV), and genital herpes.

The following section highlights some common sexually transmitted diseases (STDs). Many of these may be asymptomatic, or many may not even manifest (show signs) right away. Many who are carriers of these disease-causing viruses and bacteria may not show any signs or symptoms and still be contagious.

What is it? The human papillomavirus (HPV) is the most common sexually transmitted virus in the US. It can led to genital warts and various cancers. Approximately 20 million Americans are infected with HPV, and another 6 million become newly infected each year. HPV is so common that "at least 50% of sexually active men and women get it at some point in their lives." An estimated 4 to 6 million cases of HPV are seen each year and is the most common STD on college campuses.
Symptoms: Genital warts appear as bumps or groups of bumps in the genital area. Warts may appear weeks or months after the sexual contact with the infected partner. A partner may show no signs of warts but still be infectious. Warts may disappear over time, remain unchanged, or increase in size or number. HPV may lead to genital warts and cancer of the "vulva, vagina, penis, anus, and head and neck"). There are over 40 HPV types. Women with HPV are at heightened risk of cervical cancer and are advised to get regular pap smears for any signs of abnormality.
Transmission Routes: HPV is transferred through the genital areas of males and females through the infected skin-on-skin contact.

Genital Herpes:
What is it? Genital herpes is caused by the herpes simplex viruses type 1 (HSV-1) or type 2 (HSV-2).
Symptoms: Symptoms usually appear as blisters around the genitals or rectum, and when the blisters break, they leave behind sores that take two to four weeks to heal at the first outbreak. Other outbreaks may occur weeks or months after the first outbreak; in the first year of infection, the average is four to five outbreaks. The herpes infection may stay in the body indefinitely. Nationwide, 16.2% (one out of six) people 14 to 49 years of age have HSV-2. Herpes may make people more susceptible to HIV infection and can make HIV-infected people more infectious to their partners.
Transmission Routes: Herpes may be transmitted both when there is an outbreak and also between outbreaks.

HIV-AIDS (Human Immuno-deficiency Virus / Acquired Immune Deficiency Syndrome):
What is it? The Human Immunodeficiency Virus (HIV)-Acquired Immune Deficiency Syndrome (AIDS) is a viral infection that compromises the immune system and
Symptoms: People with HIV-AIDS may initially experience mild flu-like symptoms that last a week or two, but many do not experience any symptoms.
Some people may show no symptoms for many years, but if left untreated, the virus may lead to a compromise of the immune system which allows the presence of opportunistic infections and cancers. In the late stages of an HIV infection, in the advanced stage known as AIDS, an individual may be unable to fight off various infections and may die.
Transmission Routes: HIV is transmitted between people through blood and bodily fluids (blood, semen, vaginal secretions, and breast milk), usually through sexual contact or the use of infected needles or health equipment. Those who have contracted one or more STDs may be more susceptible to contracting HIV-AIDS because of the presence of lesions and sores.

Hepatitis C:
What is it? This virus causes inflammation of the liver. This form of hepatitis is more persistent than Hepatitis A and B.
Symptoms: Symptoms of hepatitis C infection do not necessarily emerge right away but may take 15 – 150 days to develop. A person may be infected without symptoms but still be a carrier and pass that virus on to others. Symptoms may include the following: a mild flu-like illness; nausea and vomiting; loss of appetite; diarrhea; weight loss; jaundice; and itchy skin. Those who develop chronic hepatitis C infection (an estimated 80% of those who contract hepatitis C) may develop cirrhosis of the liver or liver cancer.
Transmission Routes: Hepatitis C is a virus that is primarily transmitted by exposure to blood containing this virus. Transmission rarely occurs from exposure to other infected bodily fluids, like semen. It can also be transmitted through the sharing of drug-injecting equipment or the uses of improperly cleaned tattooing or acupuncture equipment.

Gonorrhea:
What is It? Gonorrhea is a bacterium that thrives in warm, moist areas of the body. The highest reported rates of infection are among "sexually active teenagers, young adults, and African Americans," according to the Centers for Disease Control and Prevention (CDC). Gonorrhea infection may lead to pelvic inflammatory disease, which has serious consequences including "infertility, ectopic pregnancy (a pregnancy in the fallopian tube or elsewhere outside the womb), abscess formation, and chronic pelvic pain." More than 750,000 women in the US experience pelvic inflammatory disease annually in the US.
Symptoms: Symptoms of gonorrhea include burning or painful urination, abnormal discharge, itching, and the presence of lesions or sores. Some 75 percent of women with Chlamydia do not experience symptoms at all. Men who carry this infection tend not to show symptoms.
Transmission Routes: Gonorrhea is an STD spread through sexual contact.

Condom Use:
People are advised to always use condoms and to refuse to have sex without them. Condoms, however, prevent some types of STDs, but not all. Skin-to-skin diseases like Human Papillomavirus Virus (HPV) is not preventable using condoms, and HPV is chronic.

Lifestyle Choices:
Students should limit the number of sexual partners because the more sexual contacts, the greater the odds of getting an STD. They should avoid high-risk behaviors such as unprotected sex with strangers. Students should also practice safe health habits such as avoiding alcohol and drug consumption that may compromise their decision-making. Before engaging in sex, both partners should be thoroughly tested for STDs. Many people who have various STDs are unaware of their health status and so may pass on diseases unwittingly. "Taking their word for it" is insufficient because many people are not aware of their health status. Those who are in long-term mutually monogamous relationships may lessen their risks of STD infections. Abstinence from sex is another method to prevent STDs.