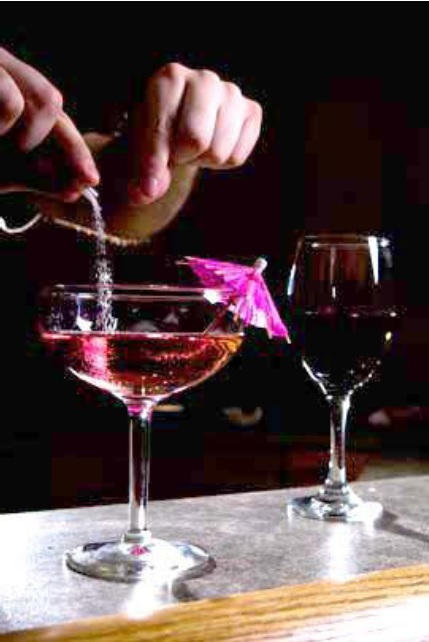 It's Not Just Stranger Danger

Date rape drugs can be administered by anyone. Not just strangers.

"Christian Challenge has become a regular item on my weekly schedule. Every Thursday night at 8:00, I'll meet up with A. and her roommates, K. and C., in Forum Hall of the KSU Student Union for "Challenge". .. Earlier that evening I was talking to B online, a guy who also goes to Challenge, and we decided we'd meet up at the Union and sit together. . .After Challenge he asked me if I had any plans for the night and since I didn't, he invited me to come over and watch a movie. . ."

"I was on a blind date with a guy my friend had set me up with—we met at a restaurant and had some drinks at Little Apple Brewery and sat down, had dinner. We were having a good time, the conversation was good, he was very complimentary of me, seemed a sweet person..." [We went to a party, where I was uncomfortable and wanted to leave. He got angry]..."I just stood there and let him say everything he wanted to say. Then I said "Are you finished," he said "No—so I'm not going to get laid?" I stood there—I could not believe he had just said that. He said, "I knew I should have put a roofie in your drink."..."

[My date offered me a drink]..."I accepted his offer. Welch's White Grape Raspberry juice w/ "just a touch of rum". I tasted it, and was quite impressed...I could hardly even taste the rum.[...]Taking that first drink was my last clear memory of the night. I don't know how much time had passed by, but the next thing I remember was being in his bathroom, leaning over the toilet. I had never felt so sick, and I knew I couldn't have been drunk...I hadn't even had a full glass.[...]I don't know if I passed out or what. But my next memory was of me waking up...in a bed that was not mine...hurting in places that I knew shouldn't have been hurting. Opening my eyes, finding myself face to face with a 250 pount monster, that no longer, in any way, resembled a cuddly teddy bear...[I left]..I don't remember driving home, nor do I remember walking into my apartment. In fact, pretty much all of Friday was hazy. I didn't go to class, I didn't go to work. I just sat in my bedroom staring at the walls. I'm not sure if I slept or not...the whole day I just kind of felt semiconscious."

" "Jane" was a KSU freshman in 2002. She and her freshman boyfriend went to a fraternity party at the Holiday Inn. They were dressed up for the dance. They went to a party also being hosted by the fraternity at a house in West Loop. They went to the house with the intention of meeting people and then returning to the Holiday Inn. At the house, they each had a couple of cups of alcoholic punch..."Peter", a 5th year senior, made drinks for the freshmen couple. They recalled that he had told Jane to "chug" hers and for her date not to drink it. However, Jane was unable to drink it all and her date drank some. Shortly thereafter, her date became ill and went outside to vomit. Jane also had became ill. Her friends noted she was sick and crying. They helped her lie down on a couch. Most of the party was outside. . .Jane remembers next waking up nude in Peter's room. She was on his bed and he was digitally penetrating her..."

These are real stories from KSU students who were administered date rape drugs by people they trusted. Please be careful and aware when out with your friends, and don't let someone else control what goes into your beverage.

All excerpts taken from "Our Stories" published by K-State Women's Center, 2008

It's Not Just Stranger Danger (pdf)