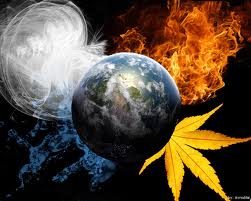 The world as we know it has a mysterious history

Before the plants, the animals, or we came

Where there existed only four forces who were quite elementary

Each was a loner, living in a secluded home

Until that gleaming sunrise on that destined day

They all felt the urge to leave and to roam

Seeking another was a drive they couldn't disobey

They broke through the barriers; never previously dared

Just beneath the beautiful stars, high in the sky

He blew down, hoping that nothing was awry

In this new territory where nothing was predictable

Fortunately, he met a maiden with whom he befriended

Water was she, tranquil and flowing smooth as a mirror

Together they laughed, and played, and pretended

Rain and maelstroms are what would now suddenly appear

A new bond was formed; the first friendship was declared

Out on the flats traveling quite slowly, yet with ease

Was Rock, with solid mind and untapped charm

He noticed that afar a blaze spread like a disease

Rock prayed that this being would mean him no harm

This blaze was Fire, who had confidence and power

Luckily, no conflict emerged, no hint of a debate

They discovered, in but a single and enjoyable hour

That swift flowing lava is what these two could create

Another bond was formed; once separated, now paired

Then, all of a sudden, and out of the blue

Rock and Fire went east, while

On a journey meant to meet others, other friends who were new

They traveled for many hours with no sign of rest

As these four forces came into sight of one another

Each silently screamed deep down a cry of glee

Rock and Fire finally found a sister and a brother

And Wind and Water added two brothers to their family

Many stories were told as their lives were compared

Wind was a wild explorer, surpassing his zone of comfort

He had seen supernovas and gazed at galaxies galore

Rock was a structured leader; disorder he tried to avert

Water was a gentle soul; a true introvert in the years past

She broke through that shell, now flowing free as a river

Fire was a passionate force, with persistence steadfast

As they knew each other better, their future was prepared

These elements were individualistic forces, yet still a whole

Traveling across the surface the world as they desired

Which was to do work, but have fun that never tired

They stayed companions for what seemed like an eternity

Through the slight disagreements that eventually past

Living in the moment was a major necessity

To create those memories that were meant to last

From that destined day on, separate experiences were shared