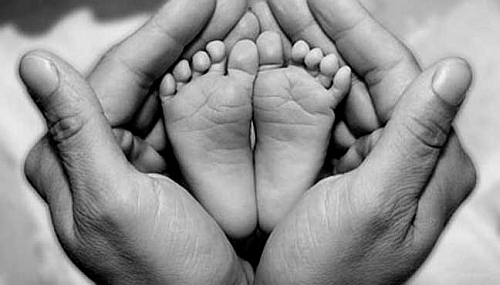 She lay there like the Christmas turkey:
exposed, ready and eager to be helped.
With no inclination of the beast
to flee her bulging belly,
she waited for the ready signal.

Blips of green beeped "Go!" and now
her heels molded into the stir-ups.
This was the maternal moment these
four females came to witness.

Sisters became eager cheerleaders
and I became a mid-wife, the hand to be squeezed.
I told her with a grin, "He looks beautiful!"
when all I could see
was a sap-covered head with a couple hairs on it.

And then the beep retreated.
She flopped back like a whale after it breeches
and we drove on with feedback and laughs.
The seconds weren't so persistent when she felt
like the reason she came was about to be
revealed from behind a big velvet curtain.

It seemed this day was the reason I had my hands
and she took full advantage of them
when the next blip reared its ugly head.
The seam broke and the crimson drops
began to flow. At that moment, I was grateful
she chose the epidural. The words "umbilical cord"
broke my daze as I saw the baby's blue face.

A snip, tie and a cry later, the doctor held
him up so she could behold his glorious physique.
Too thrilled to wait for more beeps,
she grasped the love of her life in her hands
completing the process of his childbirth.
Sniffles and tears filled the room as the boy
was named Hayden.

A gargantuan meaty creature was birthed
shortly after and talk of calcifications baffled me.
When the time came to show her new joy
to her father, she did it like a magic trick:
pulled back the less-than-velvet curtain
and happily showed off the boy.